The ANTaR Qld Board is guided by the advice of the Foundation for Aboriginal and Islander Research Action.

FAIRA is an indigenous rights organisation concerned with human rights issues as they affect the Indigenous Peoples of Australia and elsewhere in the world. FAIRA endeavours to promote the practical use of studies and research under the control of Indigenous Peoples to pursue rights and equality, rejecting the tendency to study Indigenous Peoples from academic or pretentious perspectives.

The current FAIRA representative to the ANTaR Qld Board is Mr Les Malezer. 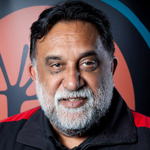 Les is the Chair of FAIRA and the 2011 Co Chair of the National Congress of Australia's First Peoples. Les Malezer was awarded the 2008 Human Rights Medal for his work in advancing the rights of Aboriginal and Torres Strait people both nationally and internationally and is a passionate advocate for rights and recognition.